2013 Lincoln MKZ - Everything Expected in a Lincoln, Plus More

2013 Lincoln MKZ - Everything Expected in a Lincoln, Plus More

We have finally received the 2013 Lincoln MKZ to our dealership, without a doubt it is an outstanding car. In the Brampton, Mississauga, Toronto and GTA area, there aren't too many of these MKZ's around since they are only now just arriving to dealerships.

At first glance, the front end has the more generic grill that the rest of the new model Lincolns are sharing, it is also accompanied by LED day time running lights. The previous generation MKZ was more of a classier version of the Ford Fusion, where this looks to be more sophisticated than it's bigger brother, the MKS. Walking around to the rear of the car, you notice the streamline roof that elegantly proceeds into the trunk, this also helps with aerodynamics; assisting with fuel economy. The rear of the MKZ is one of the key points that makes this car look ahead of it's time. While behind the car, there are a few things to be noted that sets it apart from the previous MKZ; the LED rear lamp assembly stretching completely across, the integrated quad style chrome exhaust tips, and finally what can't be seen... The trunk lid release, which is hidden above the license plate.
The roof is an enormous panoramic glass sliding panel, that when opened, slides over the rear window. Very similar to a Porsche 911 Targa configuration.

The next thing that sets this car apart from anything else on the road is the interior. With the car off, the interior is a smooth flow of paneling that shows minimal functions. Once you insert the key, the instruments on the center console light up showing all the functions which are touch sensitive. What really cleans it up is the fact that this is one of the only vehicles on the road today that does not have a shift lever. Instead, push button options for gear selection are beside the navigation screen.
Among the other features in the MKZ are; paddle shifters for optional sport driving, adaptive cruise control, automatic parking, lane departure warning, and blind-spot warning. Optional features are air conditioned front seats, heated rear seats and a heated steering wheel. As well, inflatable rear seat belts (air bags in the seat belt strap) are standard and were once only offered in the Ford Explorer.
Like all Lincolns, you would expect it to be very comfortable. Thanks to it's adaptive suspension, it absolutely is. A nice feature though, you can adjust to a sport option with the on-board computer for more spirited driving.

Under the hood there are 3 engine options, a front-wheel drive 2.0 liter 4 cylinder turbo (Ecoboost), a 3.7 liter V6 with the all-wheel drive, and soon to come, the Hybrid version which boasts 45 mpg.

If you're looking for comfort, futuristic styling and many features literally at the touch of a finger, we invite you to come take one for a test drive to see if it's the car you have always been looking for. 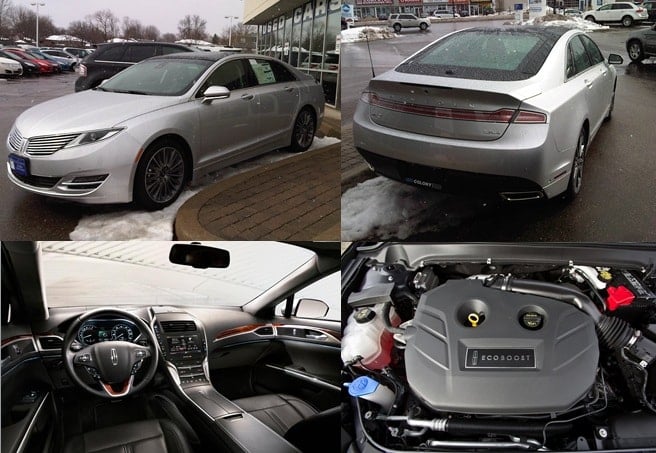